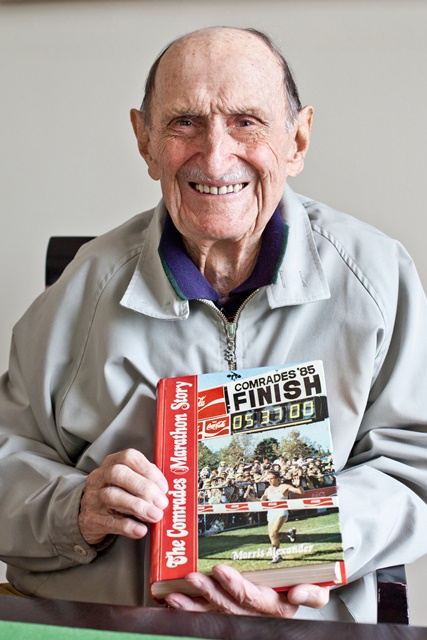 Morris Alexander – a legend in his lifetime 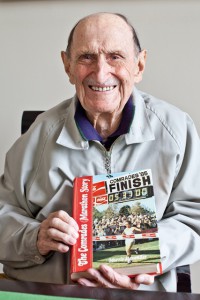 He ran 10 Comrades Marathons winning gold for three as well as four other medals; he was invited to tea with King Farouk of Egypt after he was part of the official reception party at the station in Alexandria to meet the king’s sister Fawcia after she was banished back home by her husband the Shah of Persia;  he was on the train with the Senussi King taking him across Libya to greet his people in 1944 after  years in exile during the Italian invasion; he has climbed the Great Pyramid of Giza also known as the Pyramid of Cheops; he was a guinea pig for the first Air Sickness detection test and trained as an air force navigator during World War 2 and his grandfather, Richard Charles Alexander, then the Durban police superintendent,  and his third wife, Jane, saved the life of Mahatma Ghandi in Durban in 1896.

But what 94 year old Morris Alexander, a resident at the Oasis Luxury Retirement Resort at Century City, is perhaps best known for is being the official historian of the Comrades Marathon between 1960 and 1985 and for the three  definitive  editions of The Comrades Marathon Story  he penned during this time.

In fact in the words of John Cameron-Dow who was to succeed Morris as official historian of the Comrades: “I doubt that there has been a finer book in the broad field of South African sport than Morris Alexander’s The Comrades Marathon Story…..All those who have run the great race talk about the legendary Comrades spirit and Morris Alexander captured it perfectly. In fact, he went further, he enhanced it. With all the skill of a greatly gifted author and the understanding of a pioneer runner and devoted administrator, Morris provided a living record that will remain an integral part of Comrades culture.”

Other than “the war years” when he was serving primarily in East Africa (Kenya and Abyssinia, now known as Ethiopia), Aiden and Egypt, Morris ran 10 Comrades Marathons between 1937 and 1952 delivering his best performance in 1949 when he was placed fourth. He was also placed fifth one year and sixth another.

It was a different race back then, he says.  A much smaller affair. And while the distance has never changed, the route has.  “In the early years of the race only part of the route was tarred.  It was only fully tarred in the early-1930s.  When I was running there were also a lot more steep inclines and descents. There were no graded roads, those would only come later. They simply went straight up the hill.”

The steepest climb, he says,  was  Huntleys Hill – it was steeper but much shorter than the other great hills on the race – Cowies Hill, Fields Hill, Botha’s Hill, Inchanga and Polly Shortts.  And while the route is now built  up much of the way between Durban and Pietermaritzburg, in the 1950s much of it was  undeveloped, very scenic and dotted with roadside country hotels and restaurants..

The competitors too, he says, have changed over the years.

“Back then we worked all day and trained in the evenings. Now many of the competitors are full-time athletes.  It is their job.”

It gives Morris great pride that in 1975  the Comrades  became the first truly ”Rainbow nation sporting event” where  regardless of one’s skin colour or gender  one was able to compete.

His running years were matched only by the years he then dedicated to administrating the race. In fact in 1950 it was Morris who practically single handedly  saved the marathon from a certain death and from then until 1956 he served as chief executive of the organising committee, then a “small, amateur club affair” that was  the forerunner to the Comrades Marathon Association which under Mick Winn would grow  into a major world sporting event.

For his major contribution to the Comrades, in 1990 Morris was the first “living” person to be awarded an Honorary Life member of the Comrades Marathon Association (CMA).  A posthumous award was made to the Natal MEC for Roads, Frank Martin the year before.

While his first love is the Comrades,  his second is Ships and Travel and he has notched up quite a few nautical miles in his time. In fact he sailed on five troop ships during World War 2 and has undertaken 30 other long sea journeys on mailships and cruise ships including the Astor, the Queen Elizabeth 2  and the Queen Mary 2. He has also travelled by Concorde.

“I have been to 83 countries and seen most of the great wonders of this world. The one place I have not been to is the Goudini Spa and I don’t plan going there any time soon,” he chortled.

Morris defies his 94 years and while his mobility is not what it used to be he manages to get around pretty well with the help of his zimmerframe.

When we chatted, Morris was recovering from a heart procedure  – a Trans-Aortic Valve Implant. True to form he got himself discharged from hospital within a week and in no time at all he was again up and about.

Morris has been married twice, each for 33 years.  His first wife, Nesta, with whom he had three children, died in 1975 from breast cancer. He married his second and current wife, Huibrecht, five years later.

His favourite hobby is scrapbooking  and to date he has amassed  14 tomes entitled My Life, Interests and Times in which he has documented not only highlights of his life but also milestones in the world around him and even whacky incidents that have amused him. And there are many of those as it is a keen sense of humour, a keen intellect and a cheery outlook that continues to steer  Morris through life.