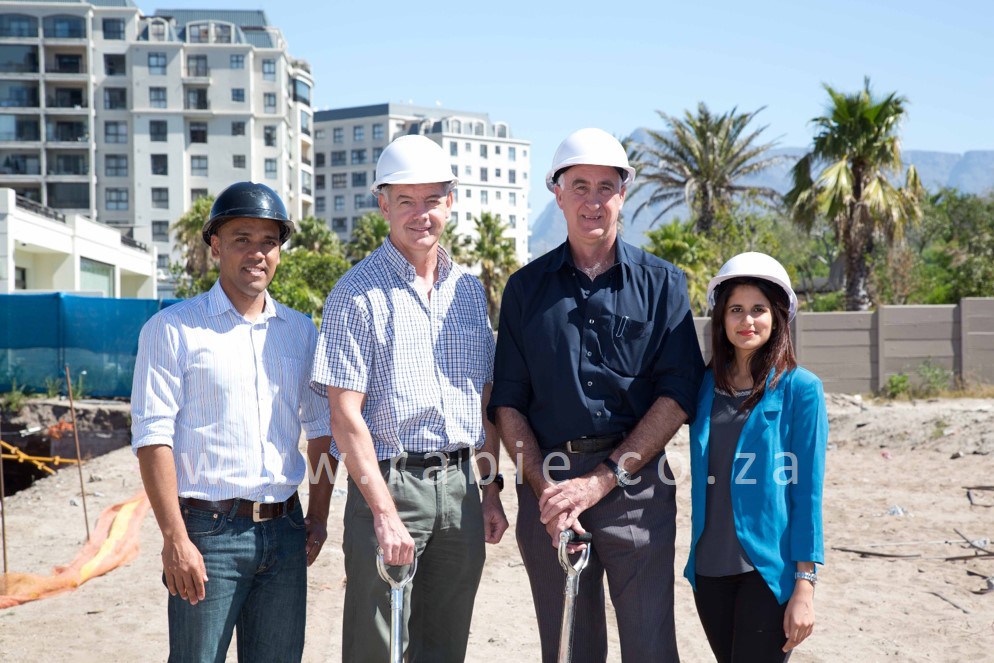 Turning the first sods on the site of Palme d’Or, the fourth building in the Oasis Luxury Retirement Resort at Century City, were from left, Raynard Haupt and Colin Green from Rabie Property Group, Nick McKinley of contractors WBHO and Nabilah Varachhia, also of Rabie.

Buyers have continued to snap up apartments in Palme d’Or, the fourth luxury block in the Oasis Luxury Retirement Resort at Century City, with 25 of the 47 apartments having been sold for a total of R110,7m ahead of construction starting.

Colin Green, a director of the Oasis Joint Venture, which comprises Rabie Property Group and a Harries Projects consortium, said three sales totalling more than R15m in the past two weeks had seen them “blasting through the R110m sales mark”.

“This has taken us over half way in terms of both the number of units sold and the total value of sales and the contractors have only this week moved on site. There are a number of additional sales close to finalization and if sales continue at this rate we can expect to be sold out before anticipated completion in June 2016 which is practically unheard of in the retirement market,” he said.

Priced from R2 655 000 to R8 510 000, VAT inclusive and with no transfer duty payable, all apartments will have at least one undercover parking.

The 11-storey Palme d’Or block will be served by two lifts and a 24 hour dedicated concierge and will be linked under cover to the Oasis Clubhouse to which all residents automatically enjoy membership.
The Club facilities include a 25m indoor heated pool where regular water aerobics classes are given by a qualified teacher, a massage room, sauna, steam room, fully equipped gym, a library, lounge areas, a restaurant, bar, bridge room, billiard room and a new 200 seater multi-purpose recreational/entertainment venue with a patio overlooking ponds and beautiful landscaped gardens which were extended with the opening of the third apartment block, Palm Royale last year and will be further extended with Palme d’Or.

Green said major attractions cited by buyers was that they could see the high calibre of the development they were buying into and that all the amenities such as clubhouse and care centre were already there and not based on future forecasts or promises.

“There is also a furnished showflat in Palm Royale – the third block we completed – where potential buyers can see the high quality of finishes they can expect.”

Green said over and above the new development sales there has also been strong demand for resales in the complex with a total of 26 apartments having been resold between April 2013 and February 2015 for a total value of close to R67million.

“All but one of these had been sold for a tidy profit with 20 percent of the gross profit – a sum of more than R3,7million– going into the Levy Stabilisation Fund which is used by the Body Corporate to help keep levy increases to a minimum going forward.”